The ancient tradition of Maori tattooing is called ‘Ta moko‘ and was performed by the Maori tribes, indigenous to New Zealand. This process entailed the skin being carved rather than punctured, by the using of uhi (chisels). This left grooves in the skin rather than leaving it smoothed when healed. 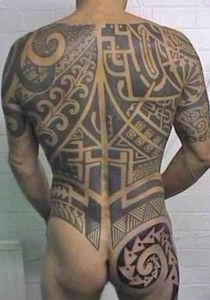 In the pre-European Maori culture, most of the tribe members with higher ranks and social statuses than others would receive moko and those who did not were considered to be of a lower social status.

Receiving moko marked an important change-over from childhood to adulthood, performed with many rites and rituals. Such tattoos were more than decorative of indicitave of rank, but they were indeed a Rite of Passage, the pain being considered the bonding of tribal brothers who had theirs done at the same time or as a show of inner control of pain.

The Tohunga ta moko (the tattooists) were considered exceptionally inviolable and sacred among the rest of the tribe members. Apart from the purpose the moko serves in showing
the ranks and social statuses of certain members, it was also used to make them appear more attractive.

Most of the instruments used by the tohunga ta moko, specialists in the art of moko, are made from albatross bone which was hafted into a handle and hit or tapped with a small mallet. The skin pigment was made from awheto and burnt timbers (ngarehu) for the blacker face colour. The soot from burnt kauri gum was also mixed with fat to make the dark pigment used on the face, depending on how solid the moko is. The pigment was stored in ornate wessles that were buried and stored under ground when they were not used. These ornate vessles, called “oko”, were handed down to successive generations
for many years.

In 1990 the ancient tradition of ta moko began to rise again for both men and women as sign of cultural identity and a general revival of the culture and language of the Maori tribes. Though some men and women follow old traditions and are still brave enough to receive their moko by the use of chisels, it is now mostly done with modern tattooing equipment.

Women have also become involved in the art of ta moko as practitioners, whereas in the ancient traditions, moko was mostly given by men. Some of the most popular female ta moko practitioners are Christine Harvey, Julie Kipa and Henriata Nicholas.

The resurgence of an ancient culture is something driven by a culture that has pride in it’s
heritage and by that, the rest of the world can learn more, not only about their culture, but
their art forms and traditions of tattooing.