The term Izerzumi, modernly better known as Traditional Japanese tattooing, refers to the insertion of ink under the skin to leave a permanent mark for either spiritual or decorative purposes. Althoughthe term is not used anymore, the tradition carries on strongly all over the world with many tattoo artists drawing inspiration from this style. 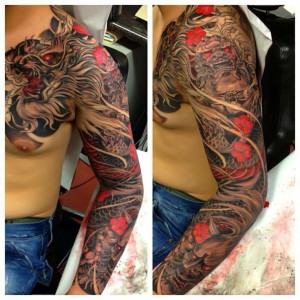 Irezumi dates back to the Paleolithic period, approximately 10,000 BC. In the following Yayoi period,300 BC – 300 AD, Chinese scholars observed that these designs were thought to have spiritual significance as well as functioning as a status symbol. Starting in the Kofun period, 300 – 600 AD, Irezumi began to be used for punishing criminals and that is why tattoo artists today refrain from using term “Irezumi”, due to the negative connotations to it.

The process of Irezumi on criminals was very painful for both the tattooist and the victim due to the tattooist having to endure the screams of pain for several hours  at a time. while playing casino en ligne game In modern times, if the tattooee wants a traditional Japanese tattoo done, they must find a
traditional tattoo master. Finding them is a daunting task by itself as these tattoo masters prefer to stay surprisingly secretive and are only found and heard of by word of mouth. Many older Japanese people who have Irezumi tattoos usually prefer to hide them or keep them hidden to the best of their  ability as it is still seen as a sign of criminality in Japan.

The main element in Japanese style tattooing is extreme detail, story telling and the bright and vibrant colours used to execute this. Some of the more popular motifs used in traditional Japanese tattoo pieces are mythological beasts and monsters, animals and birds, flowers (peonies, cherry blossoms, lotuses, chrysanthemums), other plants such as bamboo and maple leaves. Ontop of all of these there pieces revolving around more cosmic subjects such as images of “Floating World”, deities (Shinto kami) like Tengu, samurai and geisha portraits and most popularly, the Koi fish. The main background themes to these pieces mainly consist of waves, clouds and wind bars to depict the atmosphere or mood of the particular piece in the foreground.

This is to give more life to the story being told in the tattooee’s skin. The Koi fish motif is most popular among those who believe strongly  in courage and perserverence to achieve one’s ultimate goals in life. According to ancient Japanese folklore, if the Koi fish can successfully swim up a waterfall and reach the top unharmed, it will turn into the most glorious dragon and thereby fulfilling it’s life’s goal.

Today, the art of traditional Japanese tattooing is more widely accepted as an art form and not specifically labled as a process with a negative intention to the meaning behind it. There are many people, tattooists and tattooees, who find it to be a good way to express themselves through the stories and depictions used in Irezumi. With or without the negative connotations to Irezumi, it is an ancient tradition that will live on for many centuries to come.