Are tattooed people seen as the Enemy?

As people with tattoos, we all know that the responses we get from strangers are widely varied from admiration to downright shunning. Some people believe that inking your skin is nothing but a desecration of your body. The latter is well founded, actually, when the tattoo is not something worth displaying on your body or something without true meaning. Those who believe in art, in any form, may appreciate body art a lot better and will admire your choice of motif as either an expression of who you are or purely for the art of it, itself.
There has been much speculation about body art in the workplace and how far it is allowed 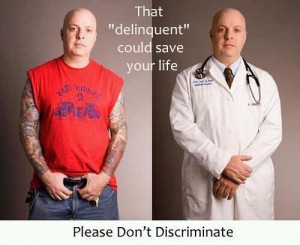 to go. Although there have been changes made in this field, the general etiquette is still to preferably hide all body art. A lot of people argue that in some job avenues it is sometimes an asset. When working with people especially, some vocations dictate a slightly more personal tone and people are always curious about tattoos. It sometimes serves as the only way to start up a conversation or, for instance, to allow a counsellor to gain access to a troubled teen.
There are some more old fashion ideas of people who have certain body art being of either a lower calibre of person or someone with a lower level of intelligence. Those people who do not know, admire or respect the art of tattooing for what it is, as an expression of individuality, give the art a bad name by tattooing pictures and/or slogans that have no significance, in that way making it seem like a completely trivial act. Tattooing is an ancient tradition amongst warriors of all cultures as a sign of various forms of earned glory or honour among their people or tribe.
Body art has been banned through the years in certain parts of the world because of its negative connotations in conservative society. Negativity towards body art has always been prevalent in society in general. Only if those who oppose it either get their own body art at some point in their lives, or until they fully understand the personal worth of a piece of expressive art in their skin, their idea of it will not likely change.
Most of us who sport skin art are well aware of how people treat us accordingly, but it all depends on how you handle the more negative criticism that will determine the views of those you talk to. We all got used to being told that we are wasting our bodies by tattooing it, mainly by our parents or grandparents who have more old fashion views on body art. Negative responses are not always a bad thing but rather an opportunity to explain it and to try open their eyes to the concept of the art and its purpose.
Whether we get positive or negative remarks and responses to your tattoos or any other form of body art, we should always stay true to who we are and what our tattoos mean to us. Taking pride in our art and not allowing negative remarks by conservative or narrow-minded people is pivotal to our pleasure in what we wear in our skins. Like most things in life, it all about ignoring the degrading criticism and enjoying the compliments.
There will always be rigid, pedantic types, but we do not have to allow them to spoil the things we love.